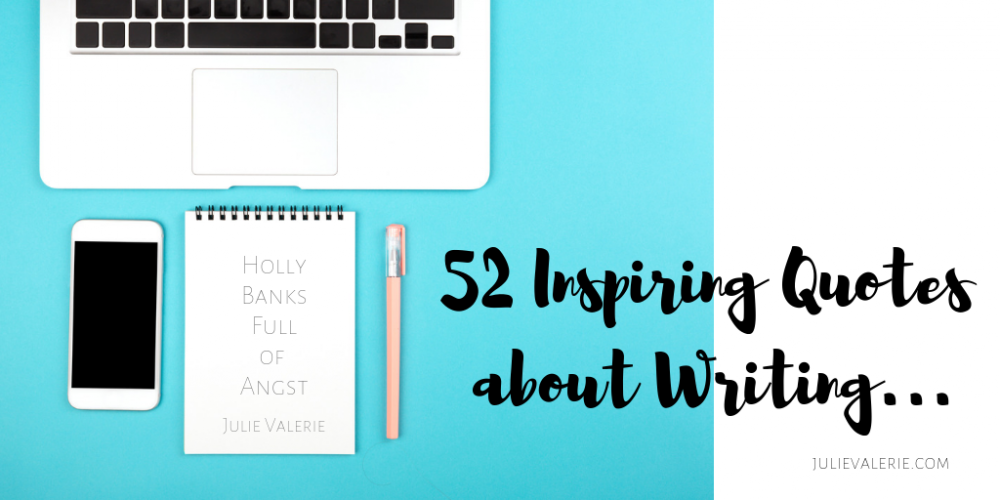 “A book is made from a tree. It is an assemblage of flat, flexible parts (still called “leaves”) imprinted with dark pigmented squiggles. One glance at it and you hear the voice of another person, perhaps someone dead for thousands of years. Across the millennia, the author is speaking, clearly and silently, inside your head, directly to you. Writing is perhaps the greatest of human inventions, binding together people, citizens of distant epochs, who never knew one another. Books break the shackles of time—proof that humans can work magic.” —Carl Sagan

Below are 52 Inspiring Quotes about Writing as shared every Thursday, from August 1, 2019, to July 30, 2020, on my Twitter page and through these hashtags: #writerslife #writing #quotes #writingadvice #quoteoftheday #inspiration.

I hope you enjoy.

1/52: “Get it down. Take chances. It may be bad, but it’s the only way you can do anything really good.” —William Faulkner

3/52: “You never have to change anything you got up in the middle of the night to write.” —Saul Bellow

5/52: “Read, read, read. Read everything —trash, classics, good and bad, and see how they do it. Just like a carpenter who works as an apprentice and studies the master. Read! You’ll absorb it. Then write. If it’s good, you’ll find out. If it’s not, throw it out of the window.” —William Faulkner

6/52: “You must stay drunk on writing so reality cannot destroy you.” —Ray Bradbury

7/52: “Words can be like X-rays if you use them properly —they’ll go through anything. You read and you’re pierced.” —Aldous Huxley

8/52: “You have to write the book that wants to be written. And if the book will be too difficult for grown-ups, then you write it for children.” —Madeleine L’Engle

9/52: “How vain it is to sit down to write when you have not stood up to live.” —Henry David Thoreau

10/52: “I can shake off everything as I write; my sorrows disappear, my courage is reborn.” —Anne Frank

11/52: “I kept always two books in my pocket, one to read, one to write in.” —Robert Louis Stevenson

12/52: “A writer is someone for whom writing is more difficult than it is for other people.” —Thomas Mann

17/52: “Substitute ‘damn’ every time you’re inclined to write ‘very;’ your editor will delete it and the writing will be just as it should be.” —Mark Twain

18/52: “If there’s a book that you want to read, but it hasn’t been written yet, then you must write it.” —Toni Morrison

20/52: “Don’t bend; don’t water it down; don’t try to make it logical; don’t edit your own soul according to the fashion. Rather, follow your most intense obsessions mercilessly.” —Franz Kafka

21/52: “If it sounds like writing, I rewrite it. Or, if proper usage gets in the way, it may have to go. I can’t allow what we learned in English composition to disrupt the sound and rhythm of the narrative.” —Elmore Leonard

25/52: “You should write because you love the shape of stories and sentences and the creation of different words on a page. Writing comes from reading, and reading is the finest teacher of how to write.” —Annie Proulx

29/52: “The purpose of a writer is to keep civilization from destroying itself.” —Albert Camus

31/52: “Ideas are like rabbits. You get a couple and learn how to handle them, and pretty soon you have a dozen.” —John Steinbeck

33/52: “Find out the reason that commands you to write; see whether it has spread its roots into the very depth of your heart; confess to yourself you would have to die if you were forbidden to write.” —Rainer Maria Rilke

34/52: “Words do not express thoughts very well. They always become a little different immediately after they are expressed, a little distorted, a little foolish.” —Hermann Hesse

35/52: “Writing books is the closest men ever come to childbearing.” —Norman Mailer

37/52: “A good writer possesses not only his own spirit but also the spirit of his friends.” —Friedrich Nietzsche

38/52: “The most valuable of all talents is that of never using two words when one will do.” —Thomas Jefferson

39/52: “I went for years not finishing anything. Because, of course, when you finish something you can be judged.” —Erica Jong

40/52: “To produce a mighty book, you must choose a mighty theme.” —Herman Melville

42/52: “I am irritated by my own writing. I am like a violinist whose ear is true, but whose fingers refuse to reproduce precisely the sound he hears within.” —Gustave Flaubert

45/52: “I love deadlines. I like the whooshing sound they make as they fly by.” —Douglas Adams

49/52: “A professional writer is an amateur who didn’t quit.” —Richard Bach

50/52: “Everybody walks past a thousand story ideas every day. The good writers are the ones who see five or six of them. Most people don’t see any.” —Orson Scott

51/52: “Don’t tell me the moon is shining; show me the glint of light on broken glass.” —Anton Chekhov

52/52: “And by the way, everything in life is writable about if you have the outgoing guts to do it, and the imagination to improvise. The worst enemy to creativity is self-doubt.” —Sylvia Plath