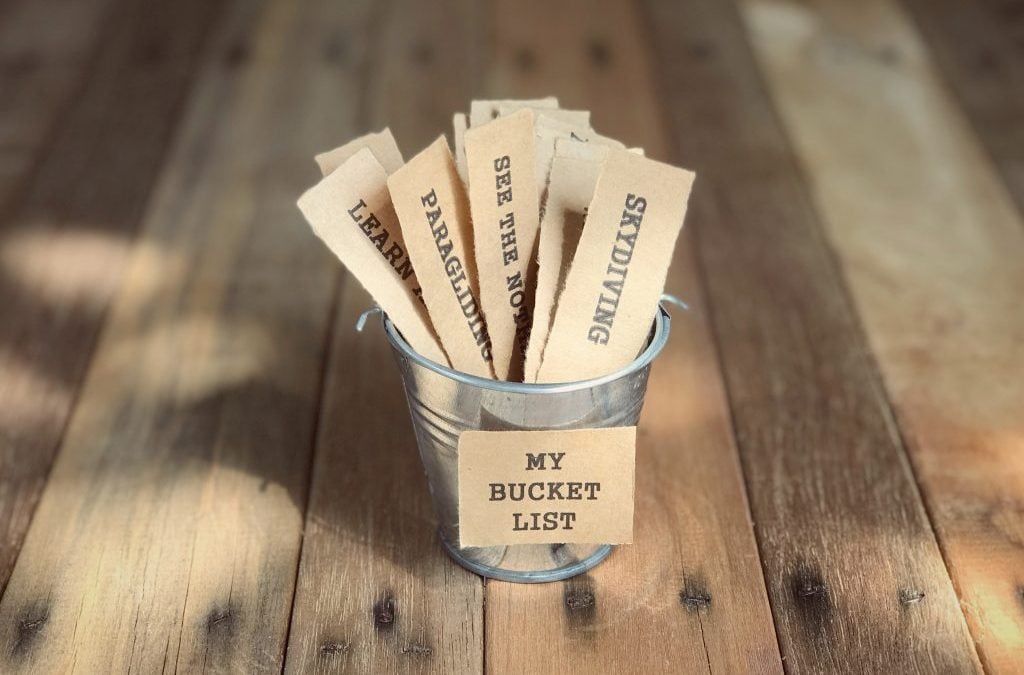 A hypothetical to toss out when someone asks—a response akin to answering what you’d do if you ever won the lottery?

I think most people’s definition of a bucket list would include language like “… a bucket list is a list of things you haven’t done yet, but want to do before you die. Before you—as the old saying goes, kick the bucket.”

So is that where the term “bucket list” originated?

Well, sort of. Yes. It was actually coined by a screenwriter named Justin Zackham who created his own list and titled it “Justin’s List of Things to Do Before I Kick the Bucket.” He eventually shortened this title to simply “Justin’s Bucket List,” but he did come up with the term by adding “list” to the idiom “kick the bucket” (to die).

The first item on Justin’s bucket list was to have a screenplay produced by a major Hollywood studio.

The first item on my bucket list has always been to have a novel published by a major publisher. In fact, that’s the only thing I’ve ever had on my bucket list. But now that I’m able to check that off the list, my list’s empty. Wait. Now that I think about it, I am section hiking the Appalachian Trail with my best friend over an eighteen year period. So there’s that. But truthfully? I’ve been thinking I need to give bucket lists a closer look. More on that in a moment.

With “have a screenplay produced at a major Hollywood studio” topping his list, Justin got to thinking. Hmm. Maybe I should write a screenplay about two guys dying—racing to finish their respective bucket lists before life finished them. That’s how The Bucket List movie starring Morgan Freeman and Jack Nicholson was born.

I suppose this list is the first “official” bucket list. Articles about Justin Zackman’s bucket list movie are the earliest known uses of the term “bucket list,” so I think we should call it. Credit for the term goes to Justin.

But are bucket lists worthwhile?

Or are they out of reach? Just plain silly?

I understand why people have mixed feelings about them.

Often, bucket lists are created when someone learns they are terminally ill. Issues, logistics, and unintended consequences often surface. But this article by Edward Duncan on Conversation.com, “How buckets lists help the terminally ill—and those around them,” seems to suggest that though bucket list items can lead to premature death by shark diving, portaledging, or volcano surfing—the motivation, goal setting, and experiences of living out a bucket list can be quite powerful.

Truthfully, I don’t know. I suppose you grab a napkin from beneath your coffee mug and scribble a few things down. Maybe you don’t have to write it down at all. Maybe just keep it in your head.

Lately, I’ve been thinking they’re something to build. Something to alter and update as your life unfolds. But where to start? Any tips?

I suppose a sloppy, first draft attempt at tackling the question of how to build a bucket list would include tips like:

I suspect the building of a bucket list is too broad a topic to be covered in one blog post. Perhaps the first item on my bucket list should read:

Maybe an item on my as-yet-to-be-built bucket list should be:

Hmm. Come to think of it? Maybe I will. Stay tuned.

How about you? Do you have a bucket list? Ever wonder how to build one?